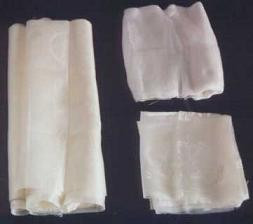 No Tibetan custom is as well known as the offering of a kata or white scarf in greeting. These are an auspicious symbol in the Buddhist tradition. It lends a positive note to the start of any enterprise or relationship and indicates the good intentions of the person offering it. Katas are offered to religious images, such as statues of the Buddha, and to lamas and government. Officials prior to requesting their help in the form of prayers or other services. The offering of the kata indicates that the request is not marred by corrupt thoughts or ulterior motives.

There are eight types of katas. Three sizes of elaborate dzod tak, which is a silk kata with auspicious designs woven into it, the Mongolian kata, which is bright blue, the ashi kata, which is plain silk, the subshi, which is loosely woven cotton, the sothar and the khachi.

There are also instances of using katas on inauspicious occasions. One of these the tying scarf around the neck of a corpse. It is said that once, when a wealthy man suddenly died, his servant, not knowing what else to do tied his cow's woolen halter around the corpse's neck and that this later became a tradition. It is also customary to tie a kata around the neck of a deceased lama, as a sign of petitioning his quick return and the unmistaken recognition of his reincarnation.

Our product is the traditional white color with the eight auspicious symbols and mantra on them.