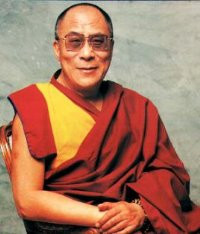 The Precious Garland by Dalai Lama

The Dalai Lama proivdes insights as well as commentary on The Precious Garland of Nagarjuna. This is a series anyone interested in wisdom, modern developments and ancient wisdom can benefit from. You do not need to be a Buddhist, or even interested in religion to enjoy this series. If you love wisdom, you'll enjoy this teaching.

Nagarjuna originally composed the text as a letter of advice to a king who was his friend. He states, "The reason I’ve come here is to share some knowledge of the Buddhist teachings with you and some thoughts about how to lead our lives. First of all I’ll give you an general introduction, then we’ll read the first chapter of Nagarjuna’s Precious Garland. It consists of five chapters of The Precious Garland of Nagarjuna..." This is a moving serious of live talks recorded at a conference.

"In the last two or three centuries, people have begun to examine reality in a scientific way, investigating how things actually work. This has given rise to the development of science and technology, which has helped us overcome many kinds of problems. Medicine, for example, has made great progress. However, at the end of the twentieth century there seems to have been a renewed interest the mind’s contribution to our happiness. Until recently, science has tended to focus on material things, but now scientists are beginning to pay more attention to the mind."

‘A leading India nuclear physicist Raja Ramana once told me that he had read one of Nagarjuna’s texts and was amazed to find an account that accords with much of what quantum physics is saying today. This is the kind of context in which I have been meeting with scientists for discussions every year for nearly 30 years. We need to remember that Buddhist explanations of the science of mind and of its view of reality have relevance today in the twenty-first century.”

MP3 format with 9 hours of teachings and commentary.