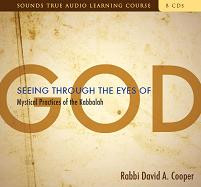 Seeing Through the Eyes of God, Rabbi David A. Cooper

Seeing Through the Eyes of God by Rabbi David A. Cooper.

Mystical Practices of the Kabbalah, an Original Path to Enlightenment.

When the prophet Ezekiel described his great vision of a holy chariot ?flashing like lightning ... with eyes all around,? he bequeathed to us a mystical tradition that has endured 2,500 years. For Judaism?s first mystics, this chariot was a vehicle leading to the Upper Worlds and the Throne of God, states of supreme awareness that unify all of creation with the divine. Now this original system for reaching beyond the heavens is fully revealed on Rabbi David A. Cooper?s Seeing Through the Eyes of God.

For nearly a decade, Rabbi Cooper lived in the Old City of Jerusalem, where he searched for the roots of the Kabbalah. What he found was the tradition developed by the Mekabbalim??those who descend from the Chariot??which led directly to the Kabbalistic school of mysticism. Now he shares this and other secrets long hidden from Jews and non-Jews alike, in a curriculum handed down from ?the masters of the mystery.?

The Path of the Tzaddik. How did the early Kabbalists use the mystical Chariot to carry them from this world to others? What was their ultimate destination? On Seeing Through the Eyes of God, Rabbi Cooper teaches 12 exact lessons used to travel to the tzaddik, a timeless and spaceless realm where all of creation interlocks and unfolds in the present moment. This path of the tzaddik, Rabbi Cooper explains, is open to every person from every faith. Join him to learn how your daily actions and thoughts can carry you, level by level, through the 12 stages of higher consciousness. From Torah, or Priorities (the art of understanding your life?s purpose) ... to Tehara, or Purifying Actions (how to magnetize your life with one right action after another) ... to Ruach HaKodesh, or Extraordinary Mind States (spontaneous communion with the divine), Seeing Through the Eyes of God presents a complete course in this original path to enlightenment.

When a great mystic describes a vision, it is notable. But when the mystic offers a vehicle that others may use to experience higher consciousness and better lives, it is remarkable. This is Rabbi Cooper?s gift, on Seeing Through the Eyes of God.

This product was originally titled The Holy Chariot.