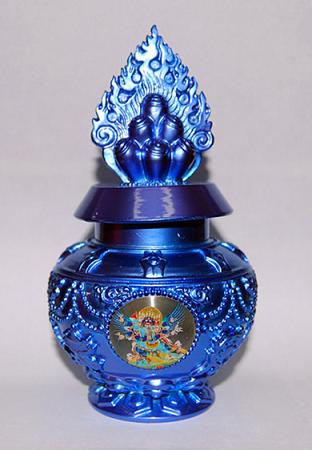 These Vajrakilaya Treasure Vase Buddha Wealth, Protection and Purification Vases are for abundance, protection from self-created negative karma and prosperity.

In Buddhism, the vase is one of the 8 Auspicious Signs. It symbolizes wealth - worldly wealth and inner wealth of our faith.

The outer manifestation of the Wealth Treasure Vase is as a vessel containing various precious substances such as gold, silver, semi-precious stones, shells, and turquoise. Wealth Vases also contain grains, such as, peas, lentils, rice, etc.,all kinds of good things that beings like. It has pictures and mantras of wealth deities, and it contains a small image of sacred deities like Vajrakilaya Buddha, the One who protects, cleanses and purifies obstacles.

Because the Vase is a source of power, keep your Wealth vase hidden from the eyes of others - place this consecrated wealth vase in corner of your home, office or meditation center wrapped in a kata, and placed in a cabinet. Every Chinese or Tibetan New Year, take the vase out and clean the outside surface. Just Don't Open The Vase.

Traditionally, the Vase was considered to protect from the negative influences of both human and non-human beings. It protected from fears of life and death. They strengthened karmic connections so that the obstacles to material gain and prosperity were eliminated. Consecrated Vases also improved the spiritual environment so worldly and transcendental accomplishments were more easily obtained.

The Vase provided material wealth and spiritual wealth; if one increased, the other did too. It is an axiom of Tibetan Buddhism that it's good to fulfill your desires as long as you do not harm anyone else. Obtaining what you want brings a great deal of self knowledge. The Wealth Treasure Vase evokes the inexhaustible wealth within us all.

The secret nature of the Vase is the state of a happy and contented mind, the elimination of evil and the increase of goodness.

The purpose of wealth is to support spiritual living, encourage generosity, charity, and sharing of wealth so that all beings will benefit. May all beings benefit from the presence of your wealth vase.

Be sure to pick up a box of Vajrakilaya incense to attract the scent of protection and create a protective energy in your home, office or practice space. We also offer Vajrakilaya prayer flags as well.